Decades ago I used to sit like a turtle when using my computer. The monitor used to be very low on the desk, and my back and neck would adjust for that. Over the years I acquired a much better posture, and I eventually bought monitors with adjustable stands. They sound amazing, and I cannot take any monitor without one serious anymore.

There is a catch, though: Their maximum height is severely limted. The Dell P2314H that I have offers only a limited range of adjustment. Neither the manufacturer nor various online resellers state the exact range. At the highest position, the center of the VESA mount is only 33 cm above the desk. As I usually work with command line windows and enter stuff at the bottom of the screen, I like to have the screen center slightly below eye level. Most ergonomics guides recommend having the top of the screen at eye level.

So I started to put books under it. And it really gave it this college student look. 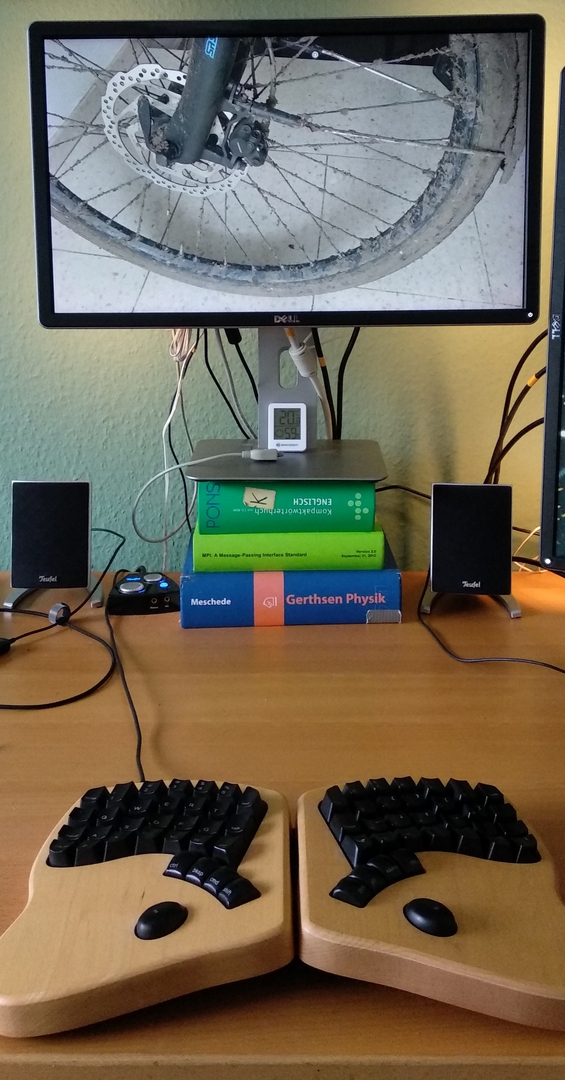 Eventually I looked into monitor arms and saw premium ones for like 250 EUR. I just didn't want to spend more on the arms than the monitor itself, so I passed. Last year I looked into arms again and found some more affordable models and setteled for a dual arm model for 60 EUR. On the product page it said 40 cm which sounded good at first.

E-mail itself is a completely insecure message service. Mails are routed through all participating servers on the world, everyone can send them. And whatever washes up in your inbox could come from anyone. It is not that bad any more, the connection from sender to sender's provider and recipient and recipient's provider is usually transport layer encrypted. The connection between the providers is becoming encrypted as well, but there is no guarantee. Essentially the providers can still read the messages, which is unacceptable for confidential messages.

In order to mitigate this problem and introduce some end-to-end encryption, e-mail protocol extensions like S/MIME and PGP have been invented. Both basically work with key pairs that everyone has to have and some vetting mechanism. In the S/MIME world the key pairs are called certificates and the vetting is done via central authorities (just like with HTTPS-certificates in the browser). PGP uses a “web of trust”, where people have to sign each other's keys to provide trust via trusted parties.

The user experience of both has been catastrophically bad. Some e-mail clients supported S/MIME, I believe that Outlook and Thunderbird did and do so. Obtaining certificates was a big hurdle. When I went to school, I didn't afford to buy one, and none of my peers did either. It was just something which was useless to have unless everyone else also has one. Instead I tried PGP in the form of GPG, but except from select other nerd friends, nobody cared for it. A plugin was needed in Thunderbird, and often enough it did not work. Keys had to be revoked, people encrypted with the wrong key (often their own), and so on. In theory, both are completely secure end-to-end solutions. In practice their are useless as people don't have certificates.

Google has this service called Photos where you can just upload photos and have a photo library. They arrange them by date, you can arrange them in albums and also search them. They did not charge anything for the storage and made it very easy to get more pictures online.

So whey didn't they charge for storage? They likely wanted to have all this data for image regonition training, and for neural network training you need huge amounts of data. By just offering free space for photos to all people, you are certain to get a bunch of picture. And so I also used the service to store my images. The Android app can also directly upload all new images, I took that as a nice photo backup especially on vacation. I started to upload more images, and eventually it turned into a great dump of pictures that were sent in chats.

Recently they have changed their policy, and in six month they will start charging for storage space. They likely now have enough images online such that they can do neural network training with it. This policy change has made me question my usage of the service. And I realized that I wasn't really using it. So I stopped the automatic upload of my data to the service and then wanted to go on and delete all images which are not linked associated with an album. In some of the travel posts I had included a Google Photos album to shore more pictures, and I wanted to keep that.

As there was no option for it on the website, I thought that the API would be a good start. It would be a Sunday afternoon Python project. I started to read the API documentation, downloaded an API key and eventually started looking for a Python library. While reading up on that, I found out that one cannot modify existing content via the API. This means that my whole idea was bust. Other people have requested this feature, but Google hasn't replied there.